"For in the Boke of God Is No Such Matter": Visual Epistemologies and Vernacular Reading Culture in Thirteenth-Century England 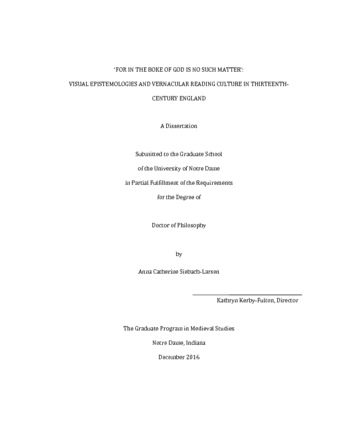 This dissertation focuses on the overlooked, yet central, role of scientific innovation in and the adoption of Aristotelian philosophy in the reading and devotional practices of multilingual and multicultural of late medieval England. Challenging both the triumphalist narrative of the rise of the English language and characterizations of medieval women as isolated from contemporary intellectual debates, this dissertation argues that readers, writers, and artists exploited multilingual literary traditions and the visual arts to expand the role of readers as powerfully autonomous agents in the production of self-identity. Each chapter of this project uses a manuscript of a popular vernacular text—Ancrene Wisse, Robert Grosseteste’s Chasteau d’amour, the Miroir de seinte egylse, and the Enfaunces de Jesu Crist—as a site for which to approach the ways in which optics and the image were used as a means for exploring the creation of the self and its relationship to various communities, arguing that visual epistemologies were at the heart of vernacular literate experience. This research thus builds upon recent work on medieval theories of cognition and optics, as well as object studies and analyses of power structures and visual / textual discourse and practice. taking up questions of knowledge and technology through an investigation of the visual epistemologies produced by the dialogic relationship between text, image, production and reception. This dissertation contributes to current work exploring the interactions of language and culture in the thirteenth century, text and image in medieval culture, the history of the book, and cognitive studies. In bringing together material culture, religious practice, and the history of science, the project revisions intellectual, social, and aesthetic networks, and traces a complex network of readers, artists, and objects who have largely been overlooked by contemporary scholarship. The result is an expansion of our understanding of the sophisticated and varied interests of the thirteenth century, and thus a clearer picture of the epistemological practices upon which later medieval English literature was built.