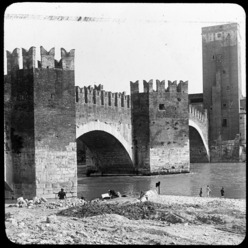 A fortified bridge over the Adige River. The segmental arch bridge featured the world’s largest span at the time of its construction (48.70 m). The della Scala (Scaligeri) family developed Verona as a military stronghold with the construction of several fortresses, such as Castelvecchio (1354-1376), as well as several bridges. The Ponte di Castelvecchio was for their own exclusive use, and was a means to cross the river from the fortress. It was built (most likely in 1354-1356) by Cangrande II della Scala. It was destroyed in WWII, but faithfully reconstructed 1949-1951.