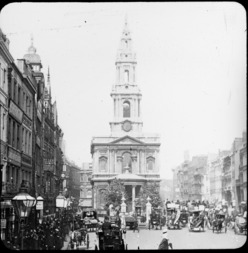 The site of the church was first used in the 9th century by Danes, who built a church dedicated to St. Clement, patron saint of mariners. A medieval church was demolished for the current building. It is situated outside the Royal Courts of Justice on the Strand. The current building was completed in 1682 by Sir Christopher Wren and it now functions as the central church of the Royal Air Force. The steeple was added to the 115 foot tower from 1719-1720 by James Gibbs. It was bombed in WWII, and the interior restored and rededicated to the RAF in 1958. The outer walls, the tower and Gibbs’s steeple, survived the bombing.