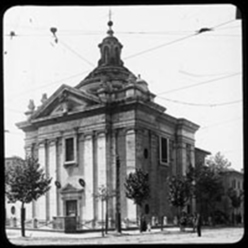 An ancient basilica in Rome, Italy. The church dates back to the 4th (or 5th) century and is devoted to four anonymous saints and martyrs. A new church was built on the site in the 12th century. The complex of the basilica is made up of two courtyards, the fortified Cardinal Palace with its Saint Silvester Chapel and the monastery.