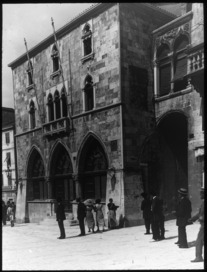 From 998 Hungary, Croatia and Venice competed for possession of Split, which in 1420 placed itself under Venetian protection. In 1797 it passed with the rest of Dalmatia to Austria, who held it until the end of World War I. The building dates from the Venetian period and served as the town hall in the 19th century. The upper floors were redone in a Neo-Gothic style in 1890.