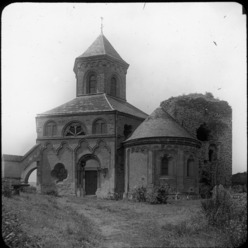 Kobern-Gondorf is a municipality in the district of Mayen-Koblenz. There is an “upper” and “lower” castle on the cliffs above the Moselle River. The upper castle features the Chapel of St. Matthias. The chapel was built by knights of Henry II of Isenburg. It is a hexagonal structure about 11 m in diameter, to which is attached an almost horseshoe-shaped choir. The tower-like central structure has sexpartite vaults supported by a cluster of six columns. The chapel was built to shelter relics including the head of St. Matthew, brought from the crusades. These had been removed by 1347; eventually arriving at Trier Cathedral in 1420. The chapel was sold to Prussia in 1819 and in 1836 through the intervention of the (later) King Frederick William IV was rescued from decay.