Great Mosque of Damascus: Facade of prayer-hall with courtyard and ablution fountain 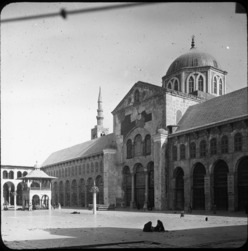 The central facade is the propylaeum from Roman times, which had been repurposed in the Christian church, and finally in the mosque.