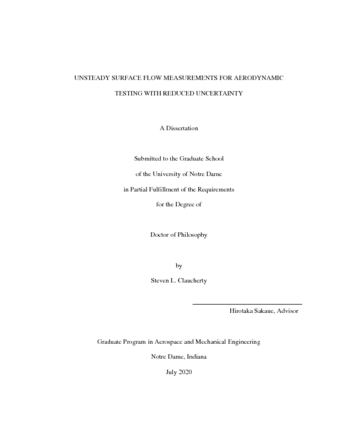 Aerodynamic measurement techniques have evolved significantly in recent years, especially in the field of optical sensors. While luminescent sensors such as pressure- and temperature-sensitive paints (PSP/TSP) have become widely used for quantitative steady-state measurements, there are still numerous error sources that make quantitative unsteady measurements challenging. This work addresses two major error sources that currently limit these measurement techniques: the nonnegligible temperature dependency of porous PSP and the problems in estimating heat transfer when a TSP coating is added to a model.

To address the temperature dependency of porous PSP, pyrene derivatives are used as the luminescent marker in the paint, which have been shown previously to have a lower temperature dependency than more commonly used markers. This luminescent chemical has been previously used for anodized aluminum PSP, another type of fast PSP, but the ability to spray it onto an existing model as a porous PSP would be advantageous for practical application, particularly to models fabricated from materials other than aluminum. This study examines the influence of different parameters in the chemical makeup of the sensor on paint performance. Static performance characteristics, namely signal level, pressure sensitivity and temperature dependency are discussed as they relate to these parameters. Using methanol as a solvent with alumina porous particles results in a sensor with 0.4 %/kPa pressure sensitivity and 0.3 %/°C temperature dependency, which makes it much less temperature dependent than comparable PSPs. This results in an uncertainty in pressure due to temperature that is approximately half that of current fast PSPs. Additionally, dynamic characterizations show that the sensor has a response time of approximately 20-30 us, which is comparable to current fast PSP sensors.

To address challenges with coating a model to obtain surface temperature measurements, a sensor using phenolic resin is developed that acts as an integral sensor to optically measure temperature. Naturally, luminescent materials such as phenolic resin provide an attractive alternative to chemical sensor coatings. Global temperature distributions are particularly helpful when validating computational models or when mapping temperature over complex geometries and can be used to calculate surface heat flux values. Static tests of different phenolic resin samples are conducted using two binder materials to strengthen the material: cloth and paper. The material shows temperature sensitivities up to -1.3 %/K with a wide operating temperature range. A novel TSP dynamic characterization method is also performed, showing a response time of approximately 90 us.

Following the characterization of both sensors, demonstrative tests were performed to show practical applications for the sensors. The new pyrene PSP was employed to measure the surface pressure and visualize the shock oscillation upstream of a forward-facing step in supersonic flow. The sensor was able to capture the mean pressure field as well as the unsteady three-dimensional motion of the shock wave. Using a shock tube, the phenolic resin TSP was used to visualize the temperature rise on the sidewall, and the results compare very well with predicted shock location data. Results from these tests and recommendations for future improvements to the sensors are presented.