Strategies of Domination: Uncertainty, Local Institutions, and the Politics of Foreign Rule 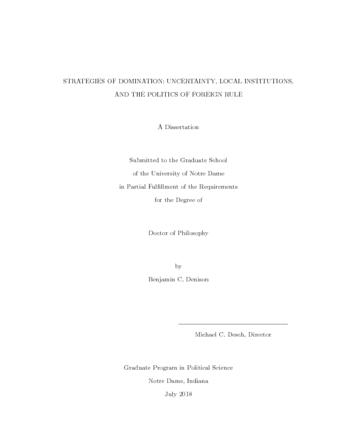 While many have illustrated the poor track record of armed state-building projects abroad, few have asked why powerful states choose to employ this costly strategy given its inherent drawbacks. If institution-building strategies frequently fail to achieve their objectives, why do powerful states ever engage in the calamitous practice? This dissertation asks two interrelated questions: What determines a foreign ruler’s choice of strategy following armed intervention, and why do foreign rulers often fail to plan post-intervention strategies prior to the arrival of troops on the ground? I argue that pre-existing institutional strength of local territories largely guides major powers’ strategic choices following armed intervention, regardless of the foreign ruler’s prior goals and preferences. Second, uncertainty prior to armed intervention inhibits assessment of local contexts and prevents selection of a foreign rule strategy until after troops have arrived in the foreign territory. Only once the foreign ruler’s military intervenes into the foreign territory can the foreign ruler assess the strength of the local institutions in the territory and their suitability for meeting their goals.

To test my argument, I use a mixed-methods research design that comprises both quantitative testing of my argument across time and space with in depth case studies to trace my hypothesized causal processes. I first broadly test my claims using an original dataset of over 160 cases of foreign rule, which includes original data collection and coding of foreign rule strategies across all cases. I then use a most-similar case design to carry out a structured paired comparison of the American interventions in Mexico and Dominican Republic under President Woodrow Wilson. Given the similarity between the cases in terms of time period, region, and international conditions, only the differences in local institutional strength between the cases remains as a plausible explanatory variable that can explain the variation in strategy. Combined, this dissertation illustrates the crucial importance local institutional strength plays in determining both the content and timing of a powerful state’s foreign rule strategy.