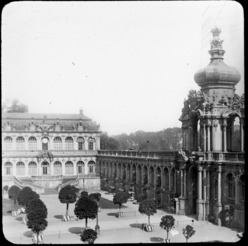 The Zwinger (Der Dresdner Zwinger) is a palace in Dresden, built in Baroque style by Frederick-Augustus I. It served as the orangery, exhibition gallery and festival arena of the Dresden Court. The location was formerly part of the Dresden fortress of which the outer wall is conserved. The name derives from the German word Zwinger (outer ward of a concentric castle). It began as a new garden laid out in 1709 to a sketch plan by the Elector himself. The two-storey gateway at the centre, the Kronentor, was loosely derived from triumphal arches and surmounted by a bulbous dome. The Zwinger was not enclosed until the Neoclassical building by Gottfried Semper called the Semper Gallery (1847-1854) was built on its northern side. It was mostly destroyed in the 1945 bombing, but was rebuilt. Today it is a museum complex with several collections including the porcelain museum (Porzellansammlung).