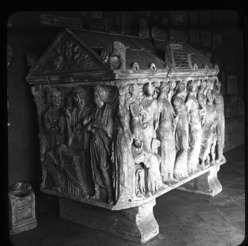 The cloister houses a collection of sarcophaguses and about 2000 fragments of tomb stones. Some of these contain inscriptions engraved in Greek, Latin and Hebrew, all taken from the necropolis discovered during the various works carried out near the Basilica.

[Almost totally rebuilt after a fire in 1823.] In addition to the standard basilicas, several major buildings were erected or decorated in Rome in the 5th century that exhibit a classicizing style and have thus been identified as part of a renaissance of Classical Roman architecture launched by Pope Sixtus III (reigned 432-440): these include S Paolo fuori le mura as decorated under Pope Leo I (reigned 440-461). The cloister dates from ca. 1205-1241. The Cosmati (traditional name for the marbleworkers of Rome (marmorarii Romani) active in the 12th and 13th centuries) produced cloisters of great beauty in the late 12th and 13th centuries, including S Paolo fuori le Mura.