Heroic Masculinity and the Problem of Violence in British Political Fiction, 1790-1850 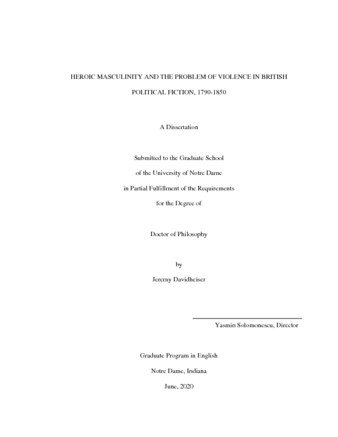 This dissertation analyzes the ways that representations of a heroic and physical masculinity express changing attitudes toward violence in political fiction published in Britain between the French Revolution and the decline of Chartism, that is, from around 1790 to 1850. Exploring the subgenres of Jacobin and anti-Jacobin fiction, historical fiction, Chartist fiction, and social fiction, this dissertation reads scenes of political heroism alongside developing ideals of nonviolence in Britain—especially concerning typically violent political processes such as warfare and revolution—and it shows how these ideals place important limits on the motives for and kinds of heroic violence depicted in fiction. Methodologically, this dissertation focuses on the minute details of scenes of action, especially those pertaining to gestures and weapons, to examine how heroic uses of the male body contribute to rather than detract from an emergent culture of nonviolence. By focusing on how authors use heroic scenes of action not to promote but to question and reimagine the concept of heroic violence, this project complicates prevailing critical and historical narratives of British masculinity’s nineteenth-century transformations. Treating description as a means of textured political argument, I argue that the fiction in this study depicts complex scenes of action to judge the proper level of physicality for men to express as well as the threshold for using force justly, all the while crafting a physical heroism attuned to the modern era’s espousal of nonviolent political change.