Aachen Cathedral: Side elevation from the north showing the Palantine Chapel dome at center 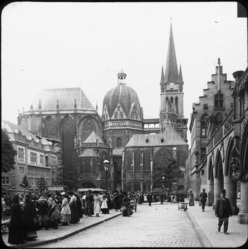 The chapel is a complex double-shell design, composed of a domed octagonal core (diam. 14.46 m), with an enveloping aisle and upper gallery, and enclosed within a 16-sided outer wall. The east end has a Late Gothic choir, while at the opposite end stands a multi-storey entranceway or westwork (seen here on the right).