Villa Carlotta, Cadenabbia: Detail, steps leading down to garden with pond and statuary 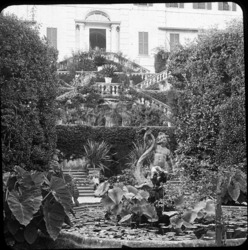 A villa on Lake Como. It was built for the Milanese marquis Giorgio Clerici in 1690. An Italian garden, with steps, fountains and sculptures was laid out at the same time. The architect who designed the villa is unknown. It was completed in 1745, and remained in the hands of marquis Clerici until 1795, when it passed by marriage to the banker and Napoleonic politician Giambattista Sommariva, who added a pediment and clock. In 1843, it was given as a wedding present by Princess Marianna of Prussia to her daughter Charlotte, Duchess of Saxe-Meiningen, after whom the villa is named. The villa became noted for its collection of art, especially 19th century sculpture, with works of Canova and Thorvaldsen. It is open as a museum and botanical garden.