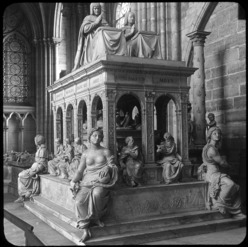 Commissioned by Francis I in 1516, was completed only in 1531. Possibly designed by Guido Mazzoni or Jean Perréal, it shows signs of an attempt to combine the French and Italian traditions in a monumental style. The two naked recumbent figures of the King and Queen, visible through the arcading of the superstructure, were placed beneath representations of the royal couple shown kneeling at prayer on top of the monument. These strikingly realistic figures are attributed to Guillaume Regnault (ca. 1450-ca. 1532). The twelve representations of Apostles are seated under the arcades, and four Virtues at the corners.