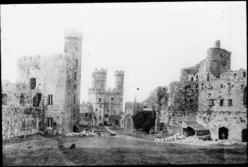 The ward of Caernarfon Castle, showing (from left to right), the Chamberlain’s Tower, and the Eagle Tower.

Royal fortress and palace in Gwynedd (county), Wales. It was begun in 1283 on the site of a Norman predecessor, and is the most splendid and important of the royal castles built in connection with Edward I’s Welsh wars. The design was intended to convey that, for Edward I, Caernarfon was also a royal palace, the seat of English government in medieval Wales. The combination of polygonal towers at Caernarfon, with walls striped in horizontal bands of light and dark masonry in the south curtain wall, has been interpreted as a deliberate and successful attempt to reproduce the 5th-century land walls of Constantinople (now Istanbul). The special status of Caernarfon is also reflected in its extensive use of carved and moulded masonry, crucial to the development of the Decorated style. In 1911, Caernarfon Castle was used for the investiture of the Prince of Wales, and again in 1969. It is part of the UNESCO World Heritage Site “Castles and Town Walls of King Edward in Gwynedd”.