The Mystical as Political: Democracy and Non-Radical Orthodoxy 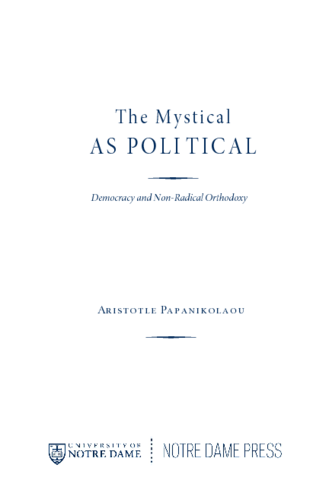 Theosis, or the principle of divine-human communion, sparks the theological imagination of Orthodox Christians and has been historically important to questions of political theology. In The Mystical as Political: Democracy and Non-Radical Orthodoxy, Aristotle Papanikolaou argues that a political theology grounded in the principle of divine-human communion must be one that unequivocally endorses a political community that is democratic in a way that structures itself around the modern liberal principles of freedom of religion, the protection of human rights, and church-state separation.

Papanikolaou hopes to forge a non-radical Orthodox political theology that extends beyond a reflexive opposition to the West and a nostalgic return to a Byzantine-like unified political-religious culture. His exploration is prompted by two trends: the fall of communism in traditionally Orthodox countries has revealed an unpreparedness on the part of Orthodox Christianity to address the question of political theology in a way that is consistent with its core axiom of theosis; and recent Christian political theology, some of it evoking the notion of “deification,” has been critical of liberal democracy, implying a mutual incompatibility between a Christian worldview and that of modern liberal democracy.

The first comprehensive treatment from an Orthodox theological perspective of the issue of the compatibility between Orthodoxy and liberal democracy, Papanikolaou’s is an affirmation that Orthodox support for liberal forms of democracy is justified within the framework of Orthodox understandings of God and the human person. His overtly theological approach shows that the basic principles of liberal democracy are not tied exclusively to the language and categories of Enlightenment philosophy and, so, are not inherently secular.