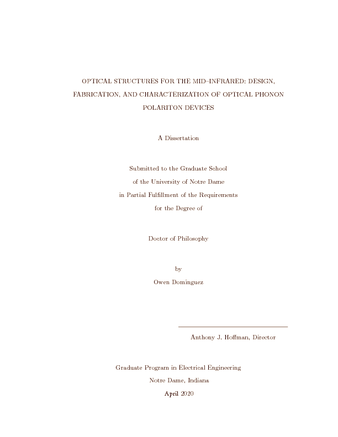 In the visible and near-IR, structures are engineered to achieve subwavelength confinement of modes to support optical sensing and imaging applications, the so-called plasmonics. However, at the mid- and far-Infrared (IR) spectral regions (long-wavelength IR), noble metals typically used in plasmonics, underperform due to their inherent loss. Therefore, a different approach is researched here by using optical phonon polaritons instead of plasmon polaritons. We investigate optical phonon polaritons resonances, these resonances are the result of light coupling with lattice vibrations (phonons) of polar materials, and are a promising approach to achieve the electrical field enhancement in a subwavelength volume in the long-wavelength IR.

In our devices, phonon polariton resonances are achieved by coupling nanoantenna modes with epsilon-near-zero (ENZ) modes. The ENZ mode is obtained from light interacting with a material at a frequency where the permittivity is vanishing, such material is known as an ENZ material.

Furthermore, we observe the pinning behavior of successive nanoantenna modes (m=1, 2, 3…) on an ENZ material, near the ENZ frequency. This pinning is due to the near-zero permittivity of the material. Eventually, these multiple modes result in a near-monochromatic multimode antenna response. We demonstrate the ability to engineer the spectral response of the nanoantennas on ENZ materials and coupling to the ENZ modes.

In this work, we present an innovative approach to engineering light-matter interactions using the properties of the polar materials, nanoparticles, and thin films, to design devices for the mid-IR, such as negative and near-zero permittivity. The approaches developed in this work are achieved in the mid-IR; however, the techniques used here are part of the foundation for our group work to support devices and structures in the far-IR. For either of these two regions, phonon interactions have been a limitation for the development of technologies. Nevertheless, these excitations, such as localized surface phonon polaritons (LSPhP) and epsilon-near-zero modes (ENZ), can be exploited using polar dielectric materials to support new technologies for the long-wavelength IR region.