Finding Mind, Form, Organism, and Person in a Reductionist Age: The Challenge of Gregory Bateson and C. H. Waddington to Biological and Anthropological Orthodoxy, 1924-1980 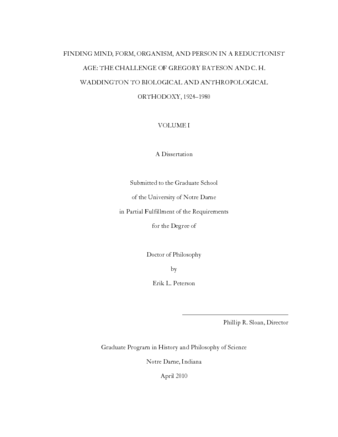 By the middle of the twentieth century, scholars in the life sciences had completed a “Modern Synthesis” of Darwinian evolution and genetics. As the self-styled “architects” of the synthesis saw it, nothing in biology made sense unless it was contextualized by their version of neo-Darwinian evolution. By the middle of the 1970s, a new field called “sociobiology” emerged to bring even the social sciences into the synthesis. Recently, however, historians, philosophers, and life scientists have begun to question the sufficiency of the Modern Synthesis and the sociobiological “New Synthesis.” Some scholars speculate that neo-Darwinism is too closely tied to a reductionistic notion of heredity that privileges the behavior of DNA over that of higher levels like organisms and groups. This dissertation explores the work of two scholars, Gregory Bateson (1904Ì¢âÂ"1980) and Conrad Hal Waddington (1905Ì¢âÂ"1975), who promoted an explicitly “organismic” theory of evolution as a refinement of neo-Darwinism decades before the sociobiological synthesis. Trained at Cambridge in the 1920s, Bateson spent the majority of his career working in the social sciences in the United States. Waddington initially studied paleontology at Cambridge, but Bateson encouraged him to study embryology and genetics. Both were trained when a fascination with “organicism” motivated work in British life sciences. Bateson and Waddington remained friends throughout their lives, despite living on different continents. Much of their communication passed through anthropologist Margaret Mead, Bateson’s former spouse and partner in ethnographic fieldwork, and also a frequent host to Waddington in his travels to the United States. Through their relationship, Bateson and Waddington found personal and intellectual support for continued work on their organismic evolutionary theory in the life and social sciences. This dissertation is the first to examine their mutual influence in detail. A study of this kind is important not only because it addresses a historical lacuna, but because their holistic evolutionary theory was not the version of evolution that came to dominate the life and, eventually, social sciences in the mid-1970sÌ¢âÂ"though there is growing support for organicism today. The experiences of Bateson and Waddington reveal the extent to which the formation of neo-Darwinism and the proposed sociobiological synthesis were complex and negotiated, rather than linear and discovered, meta-theoretical processes. The organicism of Bateson and Waddington continues to serve as an alternative to the genetic reductionism at the base of contemporary neo-Darwinism and sociobiology.