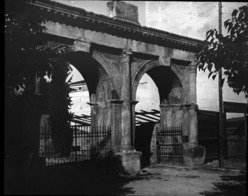 The Twin Gates (Porta Gemina) is one of the few remaining gates after the city walls were pulled down at the beginning of the 19th century. It dates from the mid-2nd century CE, replacing an earlier gate. Close by are a few remains of the old city wall. It has two arched entrances flanked by engaged columns on the outer façade, a plain architrave and an ornate frieze.