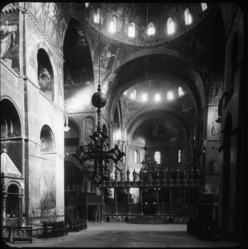 View ca. 1910-1914. The eastern arm of the Greek cross plan has a raised presbytery with a crypt beneath. The presbytery is separated by an altar screen formed by eight red marble columns crowned with a high Crucifix and statues by Pier Paolo and Jacobello Dalle Masegne, masterpiece of Gothic sculpture (late 14th century).

Studies by the excavator, Forlati, indicate that S Marco was a centrally planned, Greek-cross building from the start. The present building was begun ca. 1063 under Doge Domenico Contarini (reg 1043-1071), who wished it to reflect the increased power and wealth of Venice. He preserved the earlier foundations and reused some of the outside walls and brickwork of the earlier building. It was consecrated in 1094. S Marco is built of brick with a marble facing. It is centrally planned, on a Greek cross, with an east-west axis of 76.5 m (including the later narthex), and has five hemispherical domes on pendentives, one at the centre and one on each of the four arms. The internal height of the central dome is 28.5 m. Venetian chroniclers state that Byzantine architects were summoned, again basing the church on the Holy Apostles (remodelled in the 9th century) at Constantinople. The origins of the architect have been much debated, but the building was probably a fusion of different regional ideas. The detached campanile (now 98.6 m high) seems to have been created from an ancient look-out tower, probably in the second half of the 12th century. The campanile collapsed in 1902 and was faithfully rebuilt in 1912.