Linking Land Use, Land Cover, and Floodplains with Phosphorus Cycling and Ecosystem Function in Streams 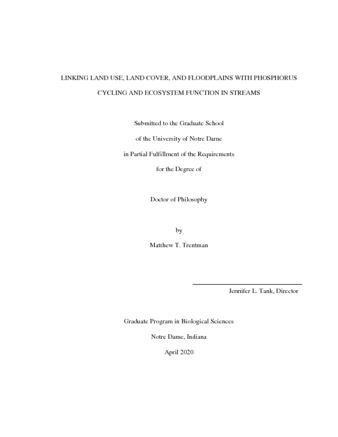 Agriculture has significantly altered global land cover as well as key biogeochemical cycles such as phosphorus (P). Approximately 40% of global land cover is now used for some form of agriculture, and the mining of P for fertilizing crops has significantly increased the amount of bioavailable P in the biosphere. In the Midwestern US, the effects of agriculture also include the use of subsurface tile drains to quickly move water away from fields, the predominance of bare fields (i.e., fallow) in the periods between cash crops, and modifying stream channels to move water quickly downstream. Combined, these factors enhance the movement of water, P, and sediments to adjacent waterways, often impairing stream function locally, and causing the eutrophication of downstream lakes and estuaries. My dissertation objective was to improve understanding of the movement and cycling of P and stream ecosystem function in agricultural systems. My goal was to evaluate linkages between terrestrial and aquatic ecosystems, focusing on the role of vegetative land cover, land use and intensity, and floodplains on the movement of P and functioning of streams. I evaluated these linkages by measuring the effect of added land cover on tile drain P export and stream metabolism, and the effect of land use intensity on stream sediment P retention. At the terrestrial-water interface, I measured P retention in floodplains and documented the different forms of P exported from a primarily agricultural watershed during contrasting disturbance events.

I found that adding vegetative cover, in the form of winter cover crops, decreases water and P exported from tile drains in spring, and that antecedent precipitation can be an important driver of P export. The addition of vegetative cover also increased stream metabolic rates, which were mediated via reduced sediment runoff and lower water column turbidity. These findings show that the addition of vegetative cover can influence the movement of water, P, and sediments across the terrestrial-aquatic interface. I also found that agricultural land use intensity can decrease P retention in streams, particularly when intensive row crop or pasture are combined with confined animal production (e.g., poultry or dairy cows). I found that restored floodplains in agricultural streams can retain P if they have 1) relatively low Fe:P ratios, which improves P sorption capacity, 2) support stable plant communities, and 3) inundate regularly. Finally, I found that storms and streambed disturbance can export different forms of P, including significant portions that are bioavailable. My dissertation highlights how and when important linkages between the terrestrial landscape and adjacent waterways control P dynamics and ecosystem function in streams.