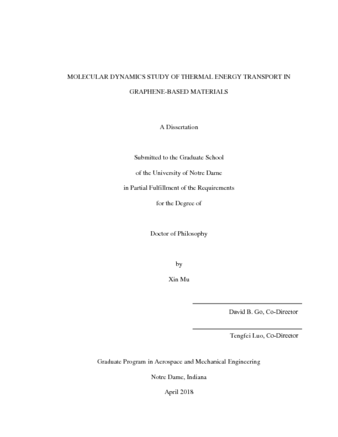 Self-heating is a critical issue in micro- and nano-electronics, and efficient heat removal is crucial for the long-term reliability and performance of micro- and nano-electronic devices. In many semiconductor devices, the power dissipation is non-uniform, which results in hot spots in the device and makes the heat removal very complicated. When two-dimensional materials are used for the electronic applications, heat dissipation problem can be aggregated because even a small amount of Joule heat can lead to a dramatic temperature rise in the ultrathin materials. In industrial practice, high-performance site-specific heat spreader and thermoelectric material based solid cooling component are two potential tools for the hot spot mitigation. Graphene, which has ultrahigh thermal conductivity, electrical conductivity and thermoelectric power factors, can potentially be used as the core material for these two applications. In my Ph.D. study, the thermal transport properties of graphene and its derivatives were investigated using classical molecular dynamics simulations. The research goal was to understand how the chemical functionalization, isotopic effects and structural modification to influence the phonon transport in graphene and across graphene-metal interfaces, which could provide important insights to the thermal transport physics in graphene, and are of practical significance for graphene-based devices in nano-electronics and thermal management applications.

In the third project, the coherent and incoherent phonon transport behavior in 12C/13C graphene superlattices was studied. The existence of coherent phonons in superlattice structure was observed when the period length was small. By changing the period length of the superlattices and thus the interface density, a minimum thermal conductivity was observed, which implied the crossover from incoherent to coherent phonon transport. The thermal conductivity of the superlattices could be further decreased as we disrupted the coherence of phonons by manipulating and randomizing the superlattice structure. Our results showed that graphene – a two-dimensional material with intrinsically weak anharmonic phonon scattering – is an ideal platform for studying the nature of phonons.

Overall, the projects conducted in my PhD study contributed to a better understanding of the thermal transport physics in pristine graphene, functionalized graphene, graphene superlattice and graphene/metal interface, which is of significant scientific importance. For application perspective, my studies offered valuable information for the design of graphene-based electronics and thermal management applications, such as graphene heat spreader and thermoelectric solid state cooling components.