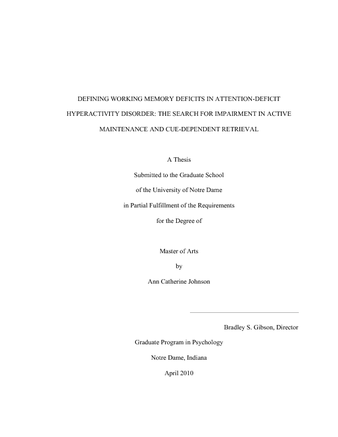 Evaluation of cognitive impairment in adolescents with Attention Deficit Hyperactivity Disorder (ADHD) identified a significant deficit in working memory. With this knowledge, researchers developed working memory training programs for individuals with ADHD in the hopes of ameliorating working memory deficits and alleviating symptoms of the disorder. Neither the nature of this working memory deficit nor the manner in which working memory is improved through training has been addressed by prior studies. The reported experiments shed light on this area by utilizing a model of working memory that evaluates two components of working memory, active maintenance in primary memory (PM) and cue-dependent retrieval from secondary memory (SM). Experiment 1 found that ADHD participants differed from non-ADHD peers largely in their ability to retrieve information from SM. Experiment 2 addressed changes in both PM and SM after either verbal-only or spatial-only training was completed, finding evidence for enhancement of PM following training.