Angkor Wat: Overall view of the inner gallery, the Bakan, and the steps up to the corner tower 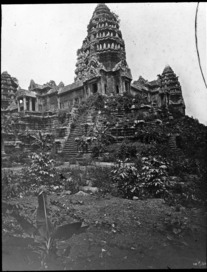 The inner gallery, called the Bakan, is a 60 m square with axial galleries connecting each gopura with the central shrine, and subsidiary shrines located below the corner towers. Three sets of steps on each side lead up to the corner towers and gopuras of the inner gallery. The very steep stairways represent the difficulty of ascending to the kingdom of the gods.