Some Model Theory of Fields and Differential Fields 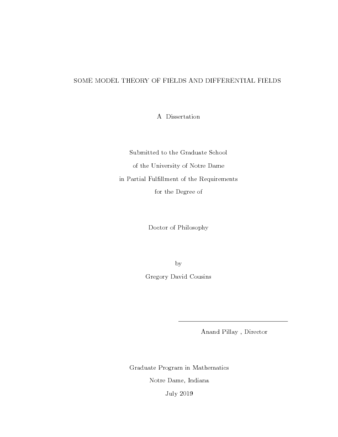 In this dissertation, we attempt to study connections between various properties of fields, namely boundedness, largeness, and strong form of model completeness called “almost quantifier elimination”. The first chapter consists of background information, and the second chapter is more or less devoted to the study of fields in the ring language, possible expanded by constants. We show that large, perfect fields with almost quantifier elimination are geometric and fail to have a strong notion of unboundedness.

The fourth chapter is based on joint work with Quentin Brouette, Anand Pillay, and Françoise Point in which we prove that if T is a theory of large, bounded fields of characteristic 0 with almost quantifier elimination, and T’ is the model companion of T together with the statement “d is a derivation” then for any model (U, d) of T’, differential subfield K of U such that C(K) is a model of T, and logarithmic differential equation dlog(z)=a (defined over some algebraic group G that is definable over C(K)), there is a strongly normal extension L of K for the equation with L a differential subfield of U.