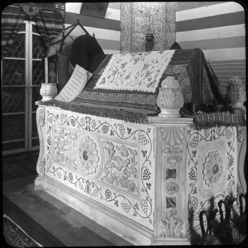 The Mausoleum of Saladin holds the grave of the medieval Ayyubid sultan, Saladin (Ṣalāḥ ad-Dīn Yūsuf ibn Ayyūb, ca. 1138-March 4, 1193). The mausoleum was built in 1196, three years after the death of Saladin by his son, Al-Adil I. It was once part of the al-Aziziyah madrasa, but nothing remains of the school. Seven centuries later (1898), Emperor Wilhelm II of Germany donated a new marble sarcophagus to the mausoleum. Saladin was, however, not placed in it. Instead the mausoleum, which is open to visitors, now has two sarcophagi: the empty one made of marble and the original wooden one, which holds Saladin.