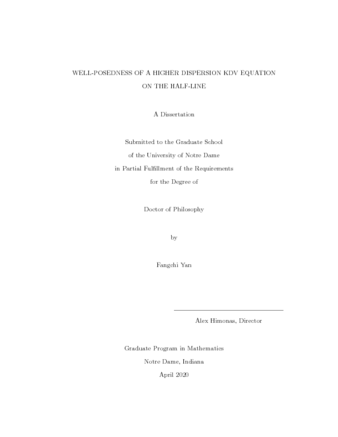 The initial-boundary value problem (ibvp) for the m-th order Korteweg-de Vries (KdVm) equation on the half-line is studied by extending a novel approach recently developed for the well-posedness of the KdV on the half-line, which is based on the solution formula produced via Fokas’ unified transform method for the associated forced linear ibvp.

Replacing in this formula the forcing by the nonlinearity and using data in Sobolev spaces suggested by the space-time regularity of the Cauchy problem of the linear KdVm, gives an iteration map for the ibvp which is shown to be a contraction in an appropriately chosen solution space.

The proof relies on key linear estimates and a bilinear estimate similar to the one used for the KdV Cauchy problem by Kenig, Ponce and Vega.