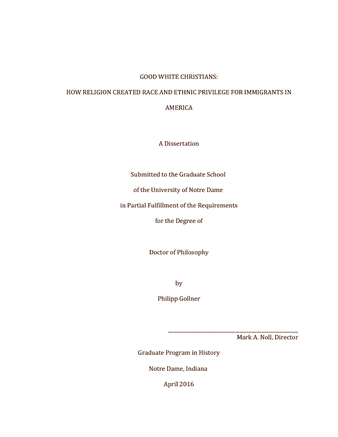 This dissertation explores how religion helped to define the interplay between whiteness, ethnicity and power between 1885 and 1924 in ways that continue to shape the United States. How, I ask, did various European immigrants employ religion to become not merely pale-skinned ethnics, but fully acceptable Americans –good white Christians? Beginning with the encounter of these immigrants with Anglo-American elites in Chicago, I trace a crisscrossing religious network that is American in its focus, but global in its account of immigrants’ and Americans’ sweeping transnational efforts of activism and world-betterment. This dissertation demonstrates that various European immigrant religious groups harnessed the cultural capital and coercive power of white Protestantism by adopting a posture of restless cultural activism and fervent missionary zeal, as well as a view of ethnic boundaries as harmful to proper religion.

While scholars of race, immigration, and religion have long tended to treat “white religion” as a byproduct of racial and ethnic binaries, I focus on how religion itself contributed to enduring cultural hierarchies. White Protestant “home missionaries” from the U.S. went on recruiting tours to Europe, scouting for racially and religiously “desirable” newcomers. In return, Swiss-German Mennonites rejected spiritualities of quietism and activated their white bodies’ privilege through “civilizing missions” to Chicago immigrants or “the dark races” of India; and a Swedish woman crossed the Atlantic in order to contribute to the project of a Christian nation by fighting Latter-Day Saints in Utah. Religion, then, mapped racial spaces, not just the other way around. And “white religion” in America as we know it today is not simply a concomitant of racial binaries, but a fundamentally spiritual construct – never simply Anglo-Saxon, nor always American-born.

This dissertation’s implications extend to the present: despite the contributions of their busy, world-bettering activism to the vitality of religious life in America, the immigrant religious groups I am interested in probably lost what could be a considerable gift to a culture still fraught with racial tensions: the instinct of ethnoreligious minorities that declined to exploit the advantages of their skin pigmentation, but opted instead for a “wise provincialism” – a position on the sidelines of dominant culture.