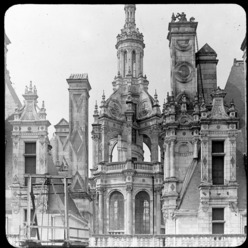 French royal château near Blois, Loir-et-Cher. It was built by Francis I, who in 1516, a year after becoming king and fresh from his victories in northern Italy, asked Leonardo da Vinci to draw up the plans for a new château to be built at Romorantin. This project was abandoned two years later, and the King decided to build instead at Chambord. Construction started in 1519 and speeded up after 1526; it continued throughout Francis I’s reign and was brought to a close under Henry II towards 1550, when the château was almost completed. It was later repaired and finished in the original style under Louis XIV. The project is extraordinary both for its sheer scale (the façade is 156 m long) and, still more, for its originality. The size of the square central keep (referred to as the ‘donjon’ from 1527), also with four round corner towers was without precedent (each side measures 44 m), and its centralized plan with a Greek cross-shaped hall and four apartments on each floor was evidently of Italian origin. The most remarkable part of the construction is the great staircase of the keep, situated at the centre of the cross-shaped hall: a spiral staircase supported by pillars in a ‘transparent’ cage, similar to that at the château of Blois. The staircase consists of two interlocking but independent spirals, so that it is possible for two people to ascend and descend without crossing one another’s path. Leonardo’s role in this design has been speculated; he experimented with these solutions in his drawings.