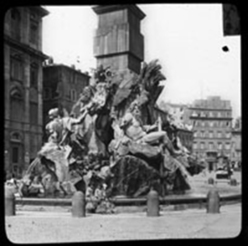 A fountain in the Piazza Navona in Rome, Italy. It was designed in 1651 by Gian Lorenzo Bernini for Pope Innocent X. The base of the fountain is a basin from the center of which travertine rocks rise to support four river gods and above them, a copy of an Egyptian obelisk surmounted with the Pamphili family emblem of a dove with an olive twig. Collectively, they represent four major rivers of the four continents through which papal authority had spread.