State Hermitage: Bridge and arcade over the Winter Canal, looking out towards Neva, Hermitage Theatre on the left 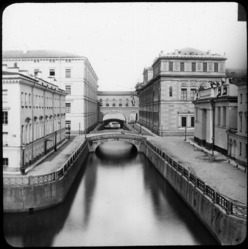 Lantern slide labeled Petrograd. The Palace sits on the Neva River and the Winter Canal is cut through the palace complex.