Hospital of Saint John of God: View of cloister arcade with polychrome tile and open trusses 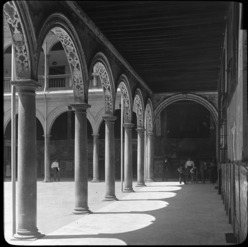 Next to the Basilica of Saint John of God is the Hospital which has been caring for the sick since 1552. In the 18th century the Hospital was extended, creating the second cloister, and covering some rooms and the main staircase that links the two cloisters with decorative diversity: tiled borders, wall paintings, polychrome marble and the Mudejar style truss of its roof. Juan Ciudad Duarte, later canonized as San Juan de Dios, came to Granada as an itinerant bookseller in 1536 after spending time as a shepherd and soldier. After reading holy works he decided on a religious and humanitarian vocation. He rented a house with room for 46 beds and started looking after the sick. In spite of initial hostility, his fame grew, followers arrived to help and funds were donated. In time he founded a charitable order that commissioned this hospital after he died in the Casa de los Pisa in 1550.