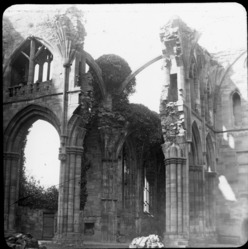 Melrose Abbey was founded in 1136 by Cistercian monks, on the request of King David I of Scotland. The east end of the abbey was completed in 1146. Other buildings in the complex were added over the next 50 years. The abbey was built in the form of a St. John’s cross. It is known for its many carved decorative details. A considerable portion of the abbey is now in ruins, though a structure dating from 1590 is maintained as a museum open to the public. Alexander II and other Scottish kings and nobles are buried at the abbey.