Beware the Magic Crocodile: The Role of Chiefs in Cultural and Political Reform in Malawi 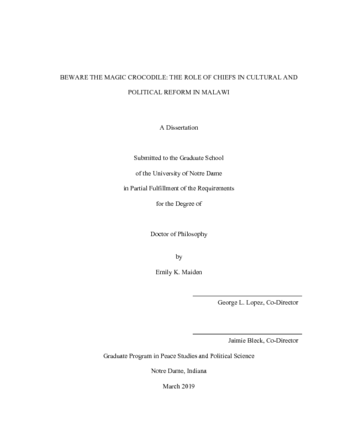 The study of chiefs as legitimate political players is a growing field in political science. Recently, scholars have looked at vote brokerage and the provision of resources, but few talk about the power of chiefs as agents of cultural change. Using Malawi as a case study, this project uses 121 interviews with chiefs, with supporting evidence drawn from approximately 50 additional interviews from key stakeholders (including teachers, child protection workers, government bureaucrats, and NGOs), and 23 focus groups with over 200 women, to explore how and why chiefs are promoting political and a cultural reform to combat child marriage.

I find that the dual positionality of chiefs as both political and cultural actors, invested with high levels of trust and support from their communities, contributes to their ability to address culturally embedded practices like child marriage, which actively promote violence against children. Chiefs are joining with government and NGO actors to promote political reform in that they are working to educate their constituents on recent changes to the national marriage laws; in many cases, they are also using their authority as chiefs to pass bylaws that incorporate harsher punishments for those found breaking the law. But chiefs are—paradoxically, many argue—taking their advocacy a step further by using their authority as the “custodians of culture” to address and reform the underlying cultural norms and practices that make child marriage acceptable. To this end, chiefs emerge as curious political actors that have the power to do what many political reforms fail to do: change the underlying culture. Chiefs should therefore be central to the efforts of NGOs, governments, and human rights activists interested in, not only passing legal reforms to reduce forms of violence, but addressing underlying culture practices that create a space through which this violence emerges.