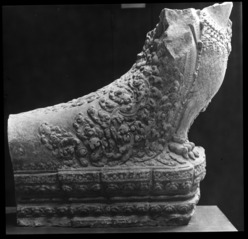 Nagas are cobra-like fantastical creatures, frequently portrayed with five heads. This fragment could also be from the roofings of the galleries which are decorated with the motif of the body of a snake ending in the heads of lions or garudas.