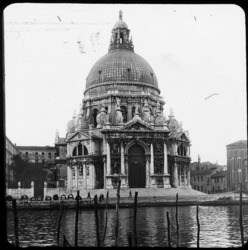 In 1630 Venice experienced an unusually devastating outbreak of the plague. As a votive offering for the city’s deliverance from the pestilence, the Republic of Venice vowed to build and dedicate a church to Our Lady of Health (or of Deliverance, Italian: Salute). The resulting domed church of S Maria della Salute, built at the junction of the Giudecca and Grand canals at the focal point of the city of Venice, occupied Longhena for more than 50 years and was consecrated after his death on 9 November 1687. Its governing concept–an octagonal space surrounded by an ambulatory–appeared in Italy in Early Christian and Byzantine architecture. Its sculptural exterior characterized by massive scrolls buttressing the dome, Longhena’s Salute incorporates subtle scenographic effects and is one of the most important buildings of the early Italian Baroque.