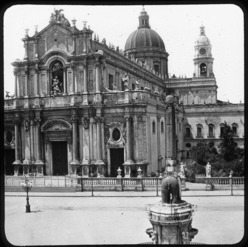 The bell tower was designed by Carmelo Sciuto Patti and has a 7.5 ton bell. This image is flipped.

The city fell into decline in the 16th and 17th centuries and was almost entirely destroyed by the great earthquake of 1693; the present centre of Catania, therefore, is distinctly 18th century in aspect, rebuilt according to the plan of the late Baroque architect Giovanni Battista Vaccarini. Vaccarini also designed many of its buildings, notably the cathedral that incorporates the Norman remains (It was originally constructed in 1078-1093, on the ruins of the ancient Roman Achillean Baths, by order of Roger I of Sicily) and the edifices surrounding the Piazza del Duomo. Much of his work reflects the creation of a new strain of Sicilian Baroque. The church is dedicated to St. Agatha. The composer Bellini is buried here.