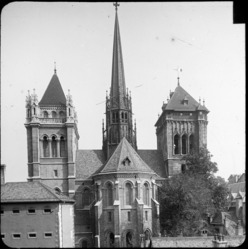 The present structure, dedicated to St. Peter, is a transitional Romanesque-Gothic work, begun in the 1160s and finished ca. 1232. It is small (l. ca. 70 m) and built to a basilical plan. The two transept towers represent the survival of a Carolingian tradition of building that was common in the Middle and Upper Rhine regions. The general plan was influenced by Cistercian churches, with two rectangular chapels at the east end of each transept. The cathedral retains its carved capitals, which are among the finest Romanesque and Gothic examples of this form of sculpture in Switzerland. It is known as the adopted home church of John Calvin, one of the leaders of the Protestant Reformation. Inside the church is a wooden chair used by Calvin. The Neoclassical facade was added in 1750.