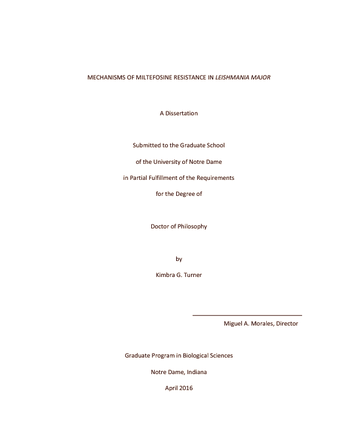 In this dissertation, I address development of resistance to treatment with miltefosine in Leishmania major. L. major is the causative agent of cutaneous leishmaniasis, a disease that faces many difficulties in surveillance and control. Current treatments are expensive and difficult to administer, requiring daily administration from a health care professional for a one-month period.Additionally, none of the currently available therapeutic options for treatment of leishmaniasis were developed specifically for the disease, leading to many severe side effects. Control is further complicated by the burden of developing resistance to pentavalent antimonials, the most common treatment in endemic areas.The most recent treatment option, miltefosine, follows an oral administration that increases appeal of this particular antileishmanial agent.However, upon further investigation, resistance to this particular option has been observed in clinical trials, and resistant strains are easily created in a laboratory environment. Miltefosine-resistant cultures of L. major were created through step-wise selection.These drug-resistant populations were then characterized as compared to the wild-type populations to determine any differences in parasite infectivity, virulence, and overall fitness.Miltefosine-resistant populations demonstrated higher rates of metacyclogenesis, but attenuated virulence in an in vivo environment. Once the parasite life cycle had been fully characterized, we further investigated mechanisms of action of miltefosine specifically in Leishmania. In cancer, miltefosine is known to induce an apoptotic cell death.In Leishmania, the drug appears to have a similar effect, inducing oxidative stress to activate an apoptotic-like mechanism resulting in cell death.