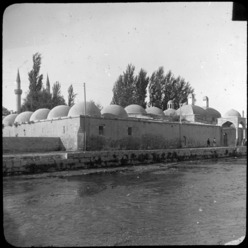 The Ottoman Turks under Sultan Selim I captured Damascus in 1516 and remained in power for 400 years. The Tekkiye complex is located on the banks of the Barada River and is composed of a large mosque on the southwest side of a courtyard, flanked by a single line of arcaded cells, and a soup kitchen across the courtyard to the northwest, flanked by hospice buildings. Takiyya is Arabic for ‘hospice.’ It was built on the orders of Suleiman the Magnificent and designed by the architect Mimar Sinan. The buildings that surround the mosque’s courtyard were also built and planned by Sinan. They were built originally as accommodation for the Dervishes, famous for their religious chants and “whirling.” It was used later as a khan to house pilgrims who were on their way to Mecca. A separate madrasa (Al-Salimiyah Madrasa) was added (1566-1567) to the southeast of the Tekiyya complex by Selim II.