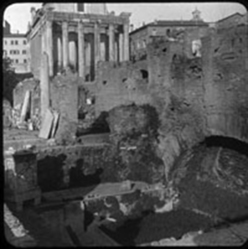 The fountain is probably located in the Temple of Saturn, an ancient Roman temple to the god Saturn. The ruins stand at the foot of the Capitoline Hill in Rome. The original dedication of the temple is traditionally dated to 497 BC. The temple was completely reconstructed by Munatius Plancus in 42 BC. The present ruins represent the third phase of the Temple of Saturn, which was built after a fire in 360 AD.