Masculinity in Context: How Social Environments Frame Gender Based Actions and Attitudes 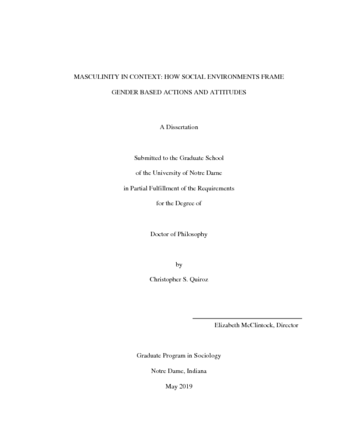 In this dissertation, I discuss how an individual’s long-term attributes and short-term surroundings collide in order to produce the variety of gendered attitudes and behaviors observed in everyday life. This work is broken into three distinct studies; the first two studies quantitatively measure the combined effect of men’s characteristics and surroundings on various displays of masculinity, while the third study qualitatively describes the gender-based consequences of embodying masculinity in male dominated contexts.

The first study addresses previous works on homosociality, inclusive masculinity, and bromance, which have generally relied on small, non-representative samples or qualitative studies to describe masculine behaviors that appear to violate heterosexual boundaries. Much of this research has theorized that heterosexual men, specifically White men, are able to violate physical boundaries with other men due to the social acceptability of the same-sex touching within masculine contexts. This study finds that for White men, more frequent participation in team sports leads to a greater likelihood of being touched in the genitals by other men. This relationship was not significant for men of color.

The second study seeks to add nuance to the scholarly notion that sport participation is both statistically and ideologically linked to hegemonic masculinity within male populations. I question how class background mitigates or exacerbates the effect of sport participation on hegemonic masculine beliefs. I find the positive association between sports and hegemonic beliefs is greatest for men with working-class parent backgrounds and is insignificant for men coming from high education households.