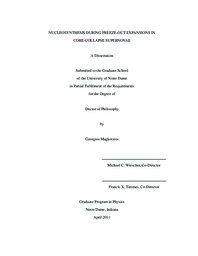 We identify two basic families of isotopes in the mass range 12 <= A <= 122 produced during freeze-out expansions near the mass-cut of core-collapse supernovae. The majority of isotopes are classified in the first family, where their mass fraction profile depends on the characteristic phase transition of the freeze-out. The isotopes of the second family include the magic nuclei and their locality, which become nuclear flow hubs and do not sustain any phase transition. We use exponential and power-law adiabatic profiles, and introduce additional non-monotonic profiles to mimic explosion asymmetries and reverse shock nucleosynthesis. We perform reaction rate sensitivity studies to identify nucleosynthesis trends of radioactive trace elements. Non-monotonic profiles involve longer non-equilibrium nucleosynthesis intervals compared to the exponential and power-law profiles, resulting in mass fraction trends and yield distributions which may not be achieved by the monotonic profiles. In addition, we compare the yields of Ti44 and Ni56 produced from post-processing the thermodynamic trajectories from three different core-collapse models – a Cassiopeia A progenitor, a double shock hypernova progenitor, and a rotating 2D explosion – with the yields from the exponential and power-law profiles. Our analysis suggests that radioactive trace elements may be produced by multiple types of freeze-out expansions in core-collapse events, and that reaction rates in combination with timescale effects for the expansion profile may account for the paucity of Ti44 observed in supernovae remnants and Mn53 in presolar grains.