Château de Chenonceau: View of the keep or donjon, the ‘Tour des Marques’ 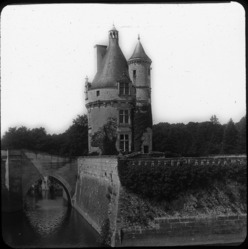 Of the medieval building, only the keep on the right bank of the Cher, the ‘Tour des Marques’, survives, with 16th-century alterations.

Built by Thomas Bohier 1515-1522. In 1560 Catherine de’ Medici, Queen of France, compelled her husband’s mistress Diane de Poitiers to surrender the Château of Chenonceau (Indre-et-Loire) to her. The gallery on the bridge spanning the Cher at the château (1576-1577), was part of Bullant’s scheme to add to the château’s sense of scale by creating dramatic axial approaches.