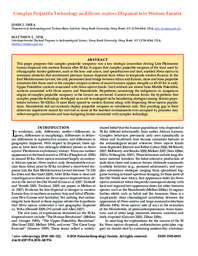 This paper proposes that complex projectile weaponry was a key strategic innovation driving Late Pleistocene human dispersal into western Eurasia after 50 Ka. It argues that complex projectile weapons of the kind used by ethnographic hunter-gatherers, such as the bow and arrow, and spearthrower and dart, enabled Homo sapiens to overcome obstacles that constrained previous human dispersal from Africa to temperate western Eurasia. In the East Mediterranean Levant, the only permanent land bridge between Africa and Eurasia, stone and bone projectile armatures like those used in the complex weapon systems of recent humans appear abruptly ca 45–35 Ka in early Upper Paleolithic contexts associated with Homo sapiens fossils. Such artifacts are absent from Middle Paleolithic contexts associated with Homo sapiens and Neandertals. Hypotheses concerning the indigenous vs. exogenous origins of complex projectile weaponry in the Levant are reviewed. Current evidence favors the hypothesis that complex projectile technology developed as an aid to ecological niche broadening strategies among African populations between 50–100 Ka. It most likely spread to western Eurasia along with dispersing Homo sapiens populations. Neandertals did not routinely deploy projectile weapons as subsistence aids. This puzzling gap in their otherwise impressive record for survival in some of the harshest environments ever occupied by primates may reflect energetic constraints and time-budgeting factors associated with complex technology.