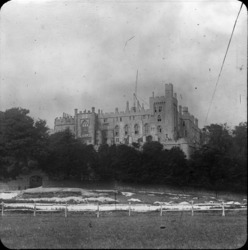 The building as seen today is largely the work of Henry,15th Duke of Norfolk (1847-1917) and the restoration project was completed in 1900.

Founded by Roger de Montgomery on Christmas Day 1067. Roger became the first to hold the earldom of Arundel by the graces of William the Conqueror. The Fitzalan Chapel dates from 1390. The castle was damaged in the English Civil War and then restored in the 18th and 19th centuries. From the 11th century onward, the castle has served as a hereditary stately home and has been in the family of the Duke of Norfolk for over 400 years. It is still the principal seat of the Norfolk family (the Howards). The castle was remodeled for a visit from Queen Victoria in 1846 and again in a building campaign that ended in 1900.