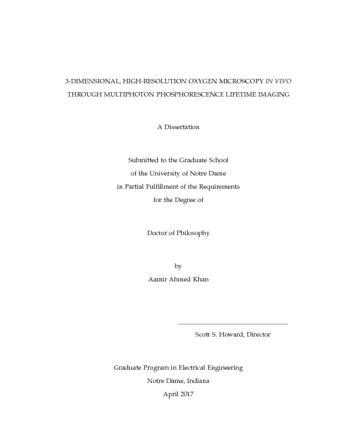 Oxygen is one of the most important molecules for life. It is involved in all stages of life and biological activity. Hence the measurement of oxygen plays a crucial role in medical research. For example, quantitative information about oxygen levels in tumors can lead to optimized treatment methods in oncology, whereas oxygen imaging of brain vasculature can lead to a better understanding of brain activity in neurological research. At the intracellular level, oxygen imaging can provide insights into cellular signaling pathways and metabolic activity.

Optical oxygen sensors offer a minimally invasive and non-consuming approach to measure oxygen via phosphorescence lifetime imaging microscopy (PLIM). To achieve a sub-micrometer spatial resolution in oxygen measurement, PLIM is used in conjunction with multiphoton microscopy (MPM) – a laser scanning microscopy technique that yields high-resolution, 3D images in thick samples. However, MPM-FLIM for biological oxygen imaging requires water-soluble phosphorescent dyes that have high oxygen-sensitivity and a large two-photon cross-section. Unfortunately, no molecule exists that possess all of these properties. Therefore oxygen-sensitive phosphorescent dyes are usually modified by attaching hydrophilic functional groups to them in order to enhance water-solubility and two-photon cross-section, as in the case of PtP-C343 for example. These probes though perform well, however, require complex chemical synthesis procedures, making them inaccessible to the most of the bioimaging community.

This work presents a simple and inexpensive alternative to the well-established, high-performance probes. We describe an easy encapsulation method to use a commercially available hydrophobic ruthenium-complex dye, [Ru(dpp)3]2+ . The dye is encapsulated in nanometer sized micelles formed by a poloxamer (a biocompatible surfactant), allowing for uniform dispersion in aqueous media. Detailed characterization experiments have been performed to show that the probe possess a near-optimal sensitivity to dissolved oxygen as well as a two- photon cross-section that surpasses that of the well-established and widely used oxygen-sensitive probes. Two-photon imaging is also performed on live mice using this probe. The resulting 3D images show excellent detail and contrast, thereby demonstrating the viability of [Ru(dpp)3]2+ nanomicelles as easily prepared probes for 3D, high-resolution, oxygen imaging in vivo.

For quantitative oxygen imaging in vivo and in vitro biological media, a “protected” version of the [Ru(dpp)3]2+ nanomicelle probe is developed by coating the micelle in a silica shell. The silica shell protects the micelle from interact- ing with proteins and ionic species in biological media resulting in an extremely long stable life (> 80 hours) in mouse blood and enabling quantitative oxygen measurements of blood oxygen in vivo with a high signal-to-noise ratio.