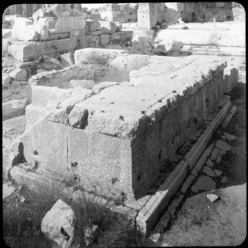 The courtyard was dominated an artificial ‘high place’ (h. 17 m), which was apparently the focal point of the sanctuary; the earlier sanctuaries on the site may well have consisted only of an altar and a court, without any temple.