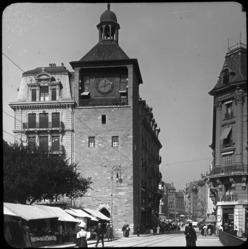 The island facing Place Bel-Air and its bridge spanning the two banks, always was a strategic point and Julius Caesar himself came to Geneva in 58 BCE and had the bridge destroyed. In the 13th century, a fortified castle was erected in order to watch for and repel the Savoyards. During the 14th century, as the era of Geneva’s fairs grew, the island became a large market. Damaged by several fires, the castle was demolished in 1677, save for its tower, which was restored in 1897.